This project involved the replacement of cooling towers on the roof of the 17th story W.P. Clements State Office Building. The roof ‘canopy’ had to be removed to facilitate any progress on the project. Two crane mobilizations were originally scheduled for the project but due to the UT football game schedule, however, the 1st crane mobilization could not be executed and the existing towers had to be removed manually. Despite being protected by sheets of ¾” plywood, the roof sustained some damaged during the manual demolition of the existing towers; MPS worked with the Manufacturers Rep. to repair the roof to the manufacturer’s satisfaction in order to continue the warranty after construction. A street closure was required for the installation of the new cooling towers; beginning at 10:00pm on a Friday for the erection of the 350 ton luffer-jib crane the closure involved a shutdown of 2 street blocks on Lavaca. The following Saturday had MPS installing the (6) new 400-ton cooling tower cells, which was completed the same day at 5:00pm. The crane was dismantled on Sunday morning, and the road closure was lifted later that Sunday. This project had relatively few issues, and those that came up were efficiently dealt with by MPS. 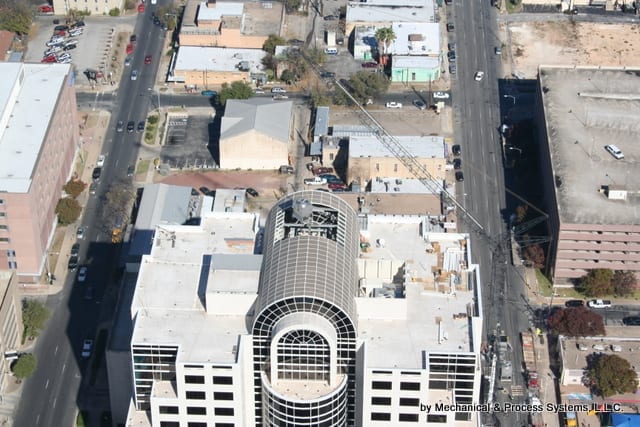 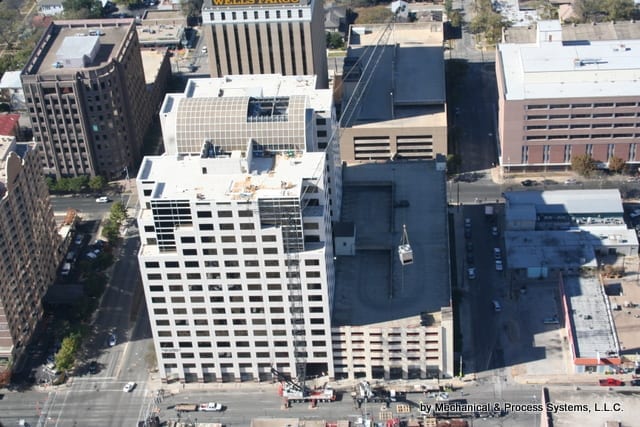